Bunny carefully loaded her fork with the delicate mango pie, slid it through the pool of cream and lifted it to her mouth.  Heaven, she thought as the wonderful blend of flavours rolled languidly across her tongue. Slowly, slowly she dug into the crisp pastry.   Magic, she thought, but she didn’t know how magic the pies were.

The mad old buzzard, Mrs Tin rattling about in her mansion with her troupe of rabbits, had hit upon the magic by accident.  If Mrs Tin had been a business woman she would have marketed it as a love potion and made her fortune, until they banned her for selling mood changing drugs.  Yes, Mrs Tin’s pies were as potent as ecstasy tinged with the imagination of acid. The pie transported Bunny to a place where true love was not just possible, it was likely.  As the active ingredients steeped Bunny’s bloodstream her body began to tingle, her skin bristled with goose pimples but she felt warm, a deep warmth. A warmth between her legs and a tingle on her nipples.  In the intensity of the moment she found one hand roving over her body as the other loaded her fork with more of the delicate mango pie. She let out a little whimper as she swallowed another mouthful. Another forkful.  Another forkful. Now in wanton greed she filled her mouth until the cream dribbled onto her chin. Then the last was swallowed. Her body was on fire, she leaned her head back, closed her eyes and allowed her body to tense, contract, release.  Her left hand pinched her nipple. Hard. Her right hand had pushed up her skirt, pushing against her pubic bone as if it were another body pressing into her.

She became aware of where she was, she let her left hand casually drop away from her breast as she breathed deeply while surveying the room.  The tea room was full but no one was looking at her, they were looking out the big windows. Looking out at the misty seascape, not quite stormy enough for a painting.  Her right hand gently stroked up and down reminding her body of the orgasmic sensations Mrs Tin’s pie had given her.

With a post orgasmic sigh she left a generous tip under the empty bowl and wearily stepped into the dark winter afternoon to make her way back to the office, back to her worries of her failing business in an ageing seaside resort. 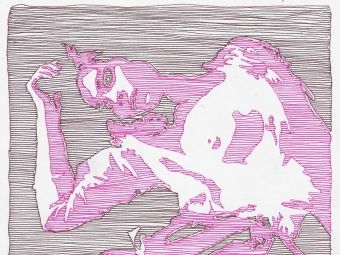